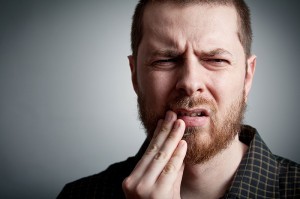 If you don’t floss a lot, then you’ll find that the first time you set out to do it on your own… it could be painful. When you’re sitting in the dentist’s chair and the assistant is flossing, it seems so easy and even though there could be very slight amount of pain, you don’t notice it nearly as much as when you go home and do it for the first time by yourself.

That’s likely because you’re anticipating more pain from your visit, even though most dental visits don’t involve any real pain. It’s the inherent expectation that we build up in our minds, and it’s the one reason we tend to avoid going to the dentist as much as we do.

Now, when you get home, pull out the floss, break it off, and hold it in your fingers, are you anticipating pain? If so, then you’re going to be susceptible to the subtle pinch or push of the floss against your gums.

If you’ve never flossed before, or it’s been a long time since you did, then expect it to feel more uncomfortable. It’s like brushing your gums. The more that you do it, the more that you massage those gums, the more they will strengthen around the teeth.

Gums swell due to bacteria, plaque, and other factors in your mouth. The more attention you give them, the healthier they will become.

Which brings us to flossing again. The first time you floss, you might experience some pain or discomfort. This could continue for some time afterward as well. You will also likely notice bleeding as a result. Don’t be too concerned, unless the bleeding won’t stop (in most cases it will).

The pain will diminish each time you floss until you don’t notice any more pain. On occasion, you may notice a pinch when flossing, and that could be the result of pressing down too hard or an infection in your gums.

Whatever you do, don’t let a small bit of pain deter you from taking care of your teeth the way that they deserve. Floss and you’ll feel better and better in no time.